From Speedclear Wiki
Jump to navigation Jump to search
This page contains excessive content, some of which is redundant, or belongs on a different page. Delete anything that's useless, and create extra pages for the stuff that belongs elsewhere!

The Domain of Anguish is an elite mission at the end of Nightfall. It consists of four areas: Foundry, City, Veil and Gloom.

Speedclear teams typically run one of the variations of trench-way. Although specific tactics can vary a bit, the team composition is generally the same:

With smaller party sizes, you typically drop the monk and/or spikers.

With 4 or 5 man party size only one tank is used, and the tank usually goes Ranger primary.

This is only a very generic guide, please refer to the area or role pages for more in-depth guides.

4 group/pop/spawn
The last (12th) spawn at Cave contains 4 enemies (the rest have 3 each). This group is special because if nobody aggros them, they will run all the way in and kill the Warden. Most runs have the spikers kill this group as it spawns.

Bad Aggro
Aggro that is caught during a behavioral where the mob is clumping together into a tight ball, rather than wandering around or running from one patrol point to the next. If aggro of a mob is caught during this state, they will tend to break off after being pulled a significantly smaller distance and try to return to their last patrol point. This causes tanks to be unable to do normal pulls. If aggro is bad, it may break off towards the team, so watch out.

Backway
the path going from monk lord to Gloom, can be used by trench tanks as opposed to running into (and popping) gloom trench.

Ether rupted
The emo’s Ether Renewal was interrupted. Also “ether stripped”, if the enchantment is removed otherwise. Bonds might go down. If possible, try not to take damage, otherwise the emo will lose energy through Protective Bond penalty. Spike hard and be alert. If you are the tank, you may need to jump in to help. Sometimes it’s fine, sometimes it’s not.

Goltway
a tactic that involves running into the trench on the way to Gloom and spiking only the front spawn along with the patrol in the trench.

Keep distance to your tank
As soon the tank runs into a group, they will run towards him until they are on “their” range to the tank (melee-, cast-range) If you would stand right behind the tank or even next to him you will inevitably catch aggro. Even if the tank uses his Death Charge to jump into a group, they will break towards the direction the tank came from. So in doubt always keep at least a castrange distance to the tank to ensure to not pull unnecessary aggro.

push
In 4th room foundry, spike from the far corner (at the gate to 5th room) rather than close to the entrance - run through the room while spiking the first group.

Why shouldn’t I use a minipet in DoA?
Minis do not catch aggro in the usual sense. Rather, minis are counted as allies by many game mechanics, including skills. This means, for example, an enemy might start using AoE skills they wouldn’t otherwise use if you were alone.
Notably, if you are tanking Black Beast, Touch of Aaaaarrrrrrggghhh can switch you with a mini which can move you outside of the ball and screw up your block.

What do I do if I catch aggro that I am not supposed to catch?
Do not pull aggro to the team unless you are instructed to!
Some enemies will break aggro if you have a cupcake active. Margonites and Tormentors (except Spirit Tormentors) will break if you under the effect of a cupcake. Other enemies, like Titans or Stygians, will follow you as long as they are close enough to you.
If you cannot break aggro, or you're unsure, just die in a place where you can be resurrected as easily as possible.

Can I pick up loot drops during the run?
If you’re not sure, ask whoever is organizing the run. Different people have different attitudes towards this. Technically speaking, you can if you don’t have to run away from where you’re supposed to be. For example, you can pick up drops at 360 (the first quest in Veil) between waves. Otherwise, do not pick up drops. Do not delay the run to pick up drops. Delaying the run even by a few seconds can cause strife for the party in critical sections. The same goes for opening Locked Chests.

Do not run out of your way to pick up drops unless you really have nowhere else to be. If you're not sure, then don't pick up drops.

Most drops are reachable after the run. If you are worried somebody else will pick it up, you can ask them not to, though they do not have to (unless it’s a gem from an area-end chest, which should always be yours).

In general you should not worry about monster drops because gems from the end chests are far more valuable. Unidentified golds and lockpicks are worth pennies compared to gem sets. The extreme value of DoA gems makes it not worth your time as a team to pick up random monster drops.

What is “casting range”?
Casting range (or caster range) is the maximum range from which you may use a skill on a target (unless the description states otherwise). If the distance between you and the target is larger than this range, the game will automatically run you towards the target. However, the game WILL move you not just into casting range, but in aggro range. The target will therefore see you when you begin using your spell rather than when the spell finishes casting.

This is especially important for monsters that use interrupts. You should never auto-run to these targets because it will give them a chance to interrupt you. Instead, select the target, then walk so your bubble almost touches the yellow circle. This will ensure the target sees you only when your first skill is successfully used. 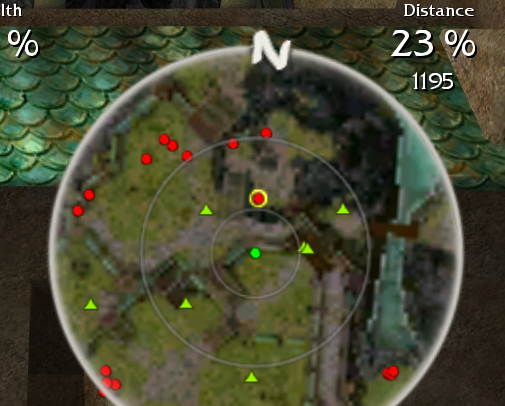 If you are unsure of this exact distance, you can also bring your bubble slightly closer so it actually touches the yellow. (But, of course, don’t touch the red.)

Unyielding Aura can also resurrect at about this range. You can therefore resurrect a party member when a monster is on top of them, without drawing aggro.