T2 is a role in UWSC (UW Terraway). The T2's job is to clear the areas of Twin Serpent Mountains, and Spawning Pools, and to do their quests.

At the beginning feel free not to use any pcons since you will recieve Protective Bond from the emo which will provide you enough survivability.

As soon as that happens jump into the closest target and run towards the right side of the Chamber to pop the hidden graspings.

Make sure to aggro the aatxe on the stairs if hes moving. You can do that by jumping off of him with Vipers Defense or Heart of Shadow.

After that wait for the LT to start running down the stairs on his side and pull with him all the enemies into the corner.

After the spike is done use your cupcake and run away diagonally towards the corner. That allows the LT to use you as a target to jump over the staircase wall.

When leaving Chamber feel free to use Deaths Charge onto any nightmare to close some disctance between you and the rest of the team since you wont be using that skill any time soon.

Target the t4 and jump up the ledge. If you are using HoS the QZ has to be active otherwise it wont recharge in time for another jump, in that case you have to run around. If you are using Viper's you can use it regardless if QZ is active or not.

Make sure to use your anti knock-down skill (Dwarven Stability with Alcohol or IAU) before performing the next jump. By not using any other enchantment neither you or the T3 will get rended if a nightmare spawns on your way. If you were to use Shadow Form and the T3 didnt, he will become the target of the nightmare and most likely end up dead.

Run to the bottom of the ramp, select a target behind you and jump up. 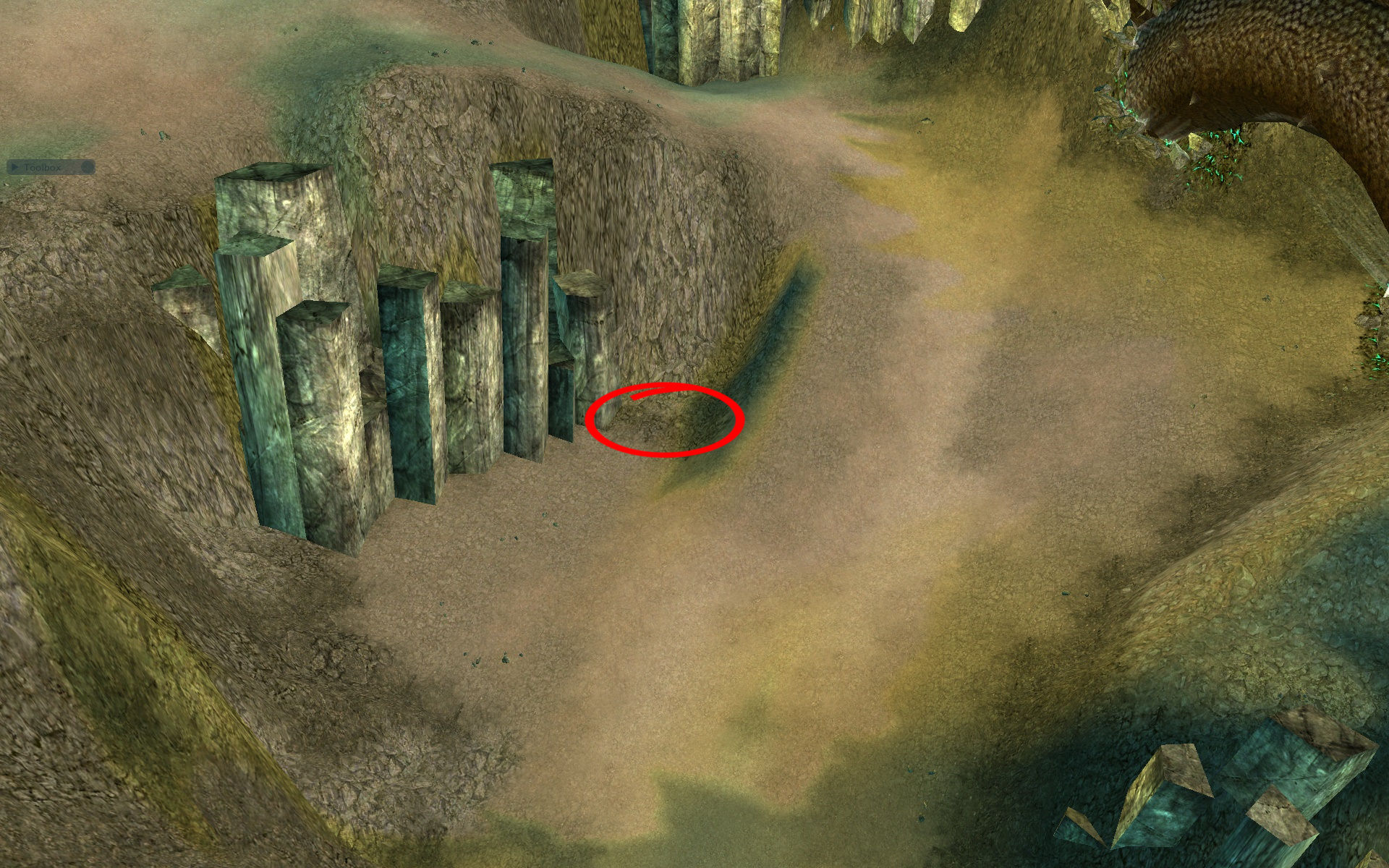 Next select the most further away Behemoth and Deaths Charge to it. 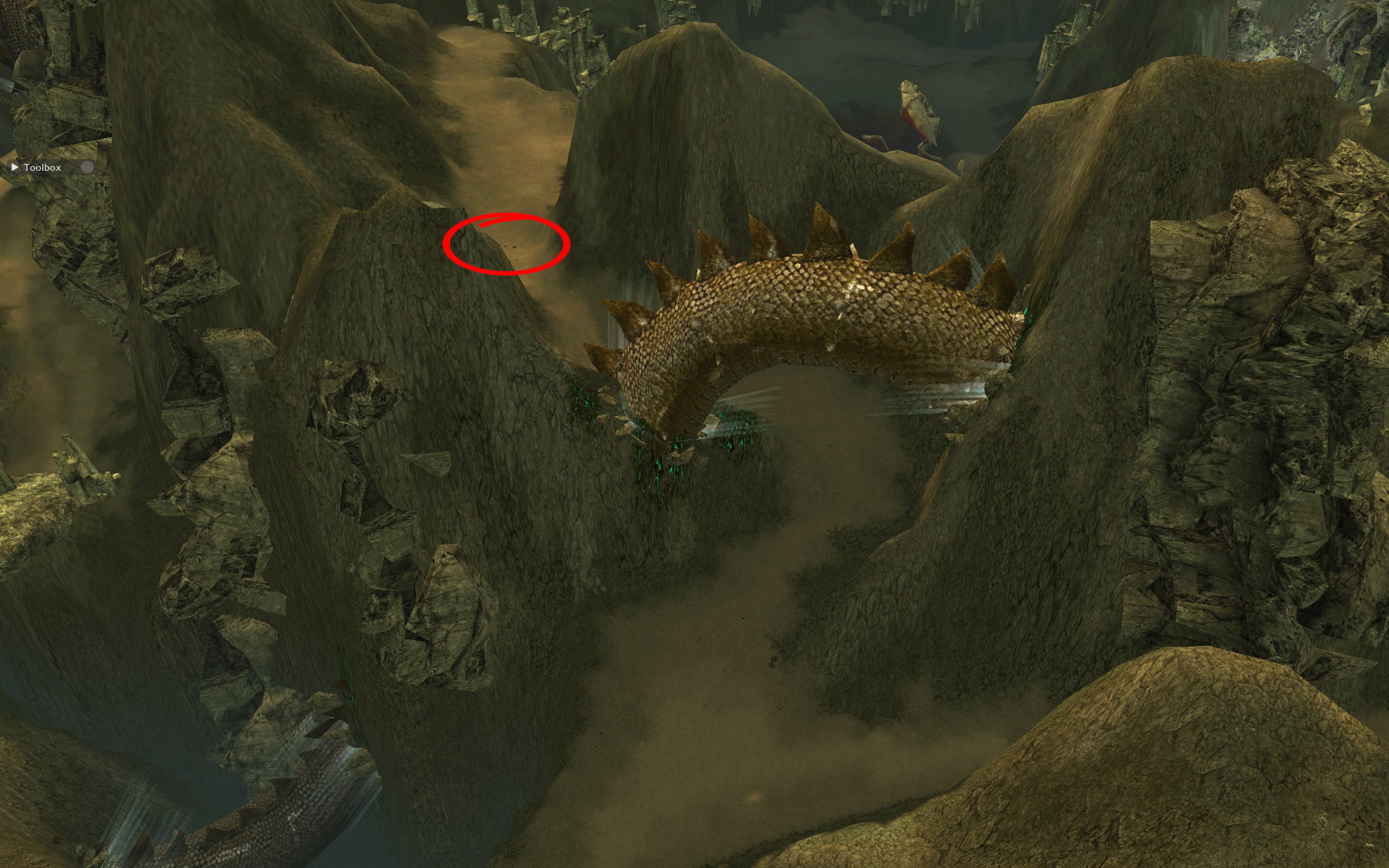 If you end up stuck, use a target behind you to jump over the obsctacle. This can cause the skele patrol to be in a inconvenient position during the Mountains quest. Continue running towards the monument.

You will meet a Charged Blackness patrol consisting of either 2 or 3 of them.

Place your winnowing at this spot. 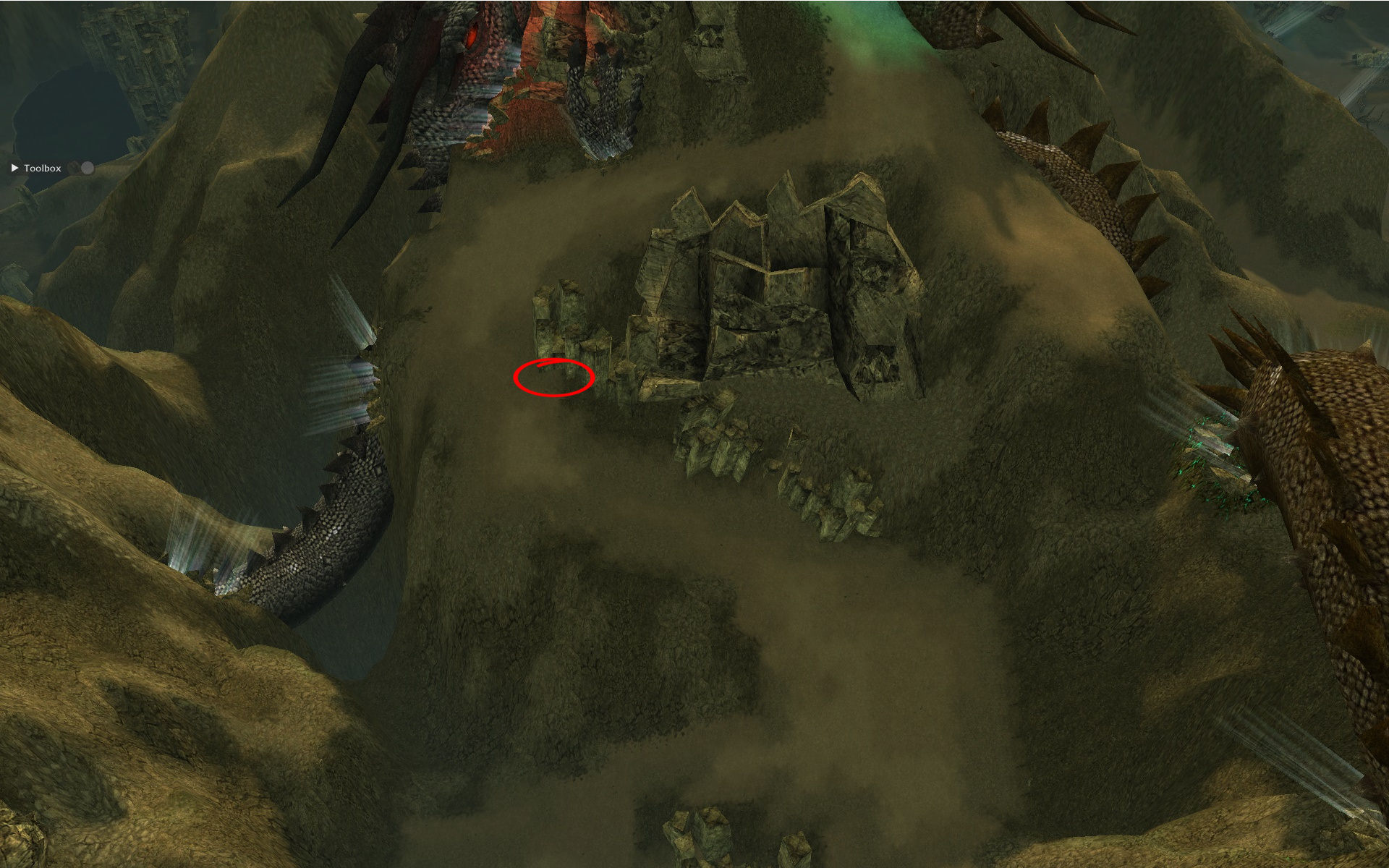 Run up to the dryder ball or Deaths Charge to them. Unglitch them and start killing behemot groups.

The key to popping fast is to kill everything in as few groups as you can. Therefore:

When jumping into the ball consider using another target as a way to Viper's or HoS off of it. It's way more precise compared to Deaths Charge if you know how to position yourself.

Obsidian Behemoths will use Healing Spring only if you are further away from them than melee range. That skill is considered as a trap, which means its easily interruptable even with auto attacks. In order to limit the ammount of enemies using it you should stand as close as you can to as many of them as possible. Its easy to distinguish which one is going to be using healing spring knowing how far away from them you are standing. They are using it always in the same order which makes it easy to remember. In addition to that behemots use whirling defence if you attack them with a physical type of damage weapon, thats why you should always approach them with a staff.

After the terrorwebs are dead the reaper will spawn. There can be a situation where he's in aggro of the behemoth group at the bottom right away, which puts him into combat mode. That means you will be unable to take the quest. There is copule of ways to deal with that: 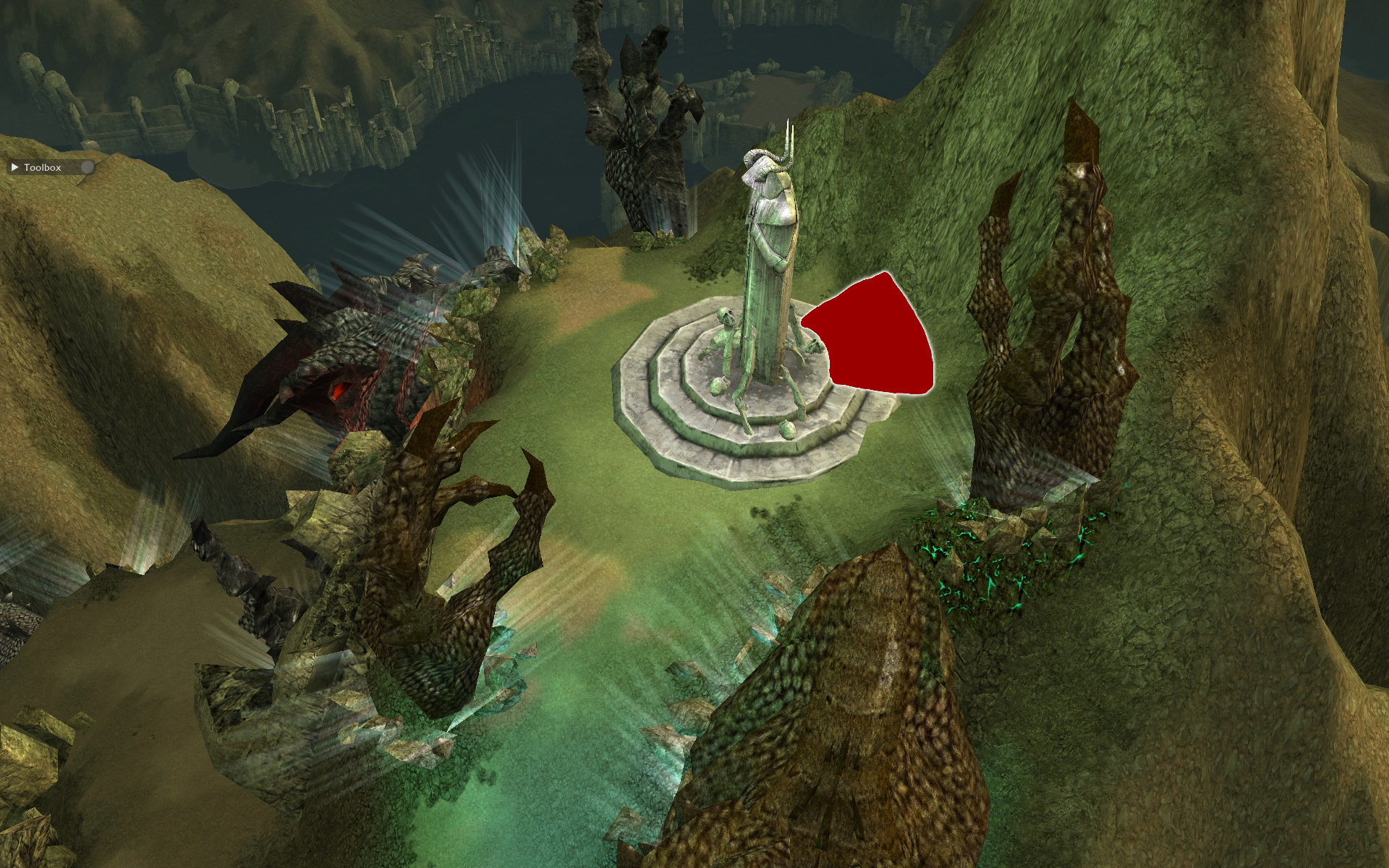 If any of the Behemoths spawn in this radius, you dont have to kill them. When the reaper appears, their attacks will get obstructed by the texture of the monument.

There is copule of things you should know about the slayer before you start fighting him: 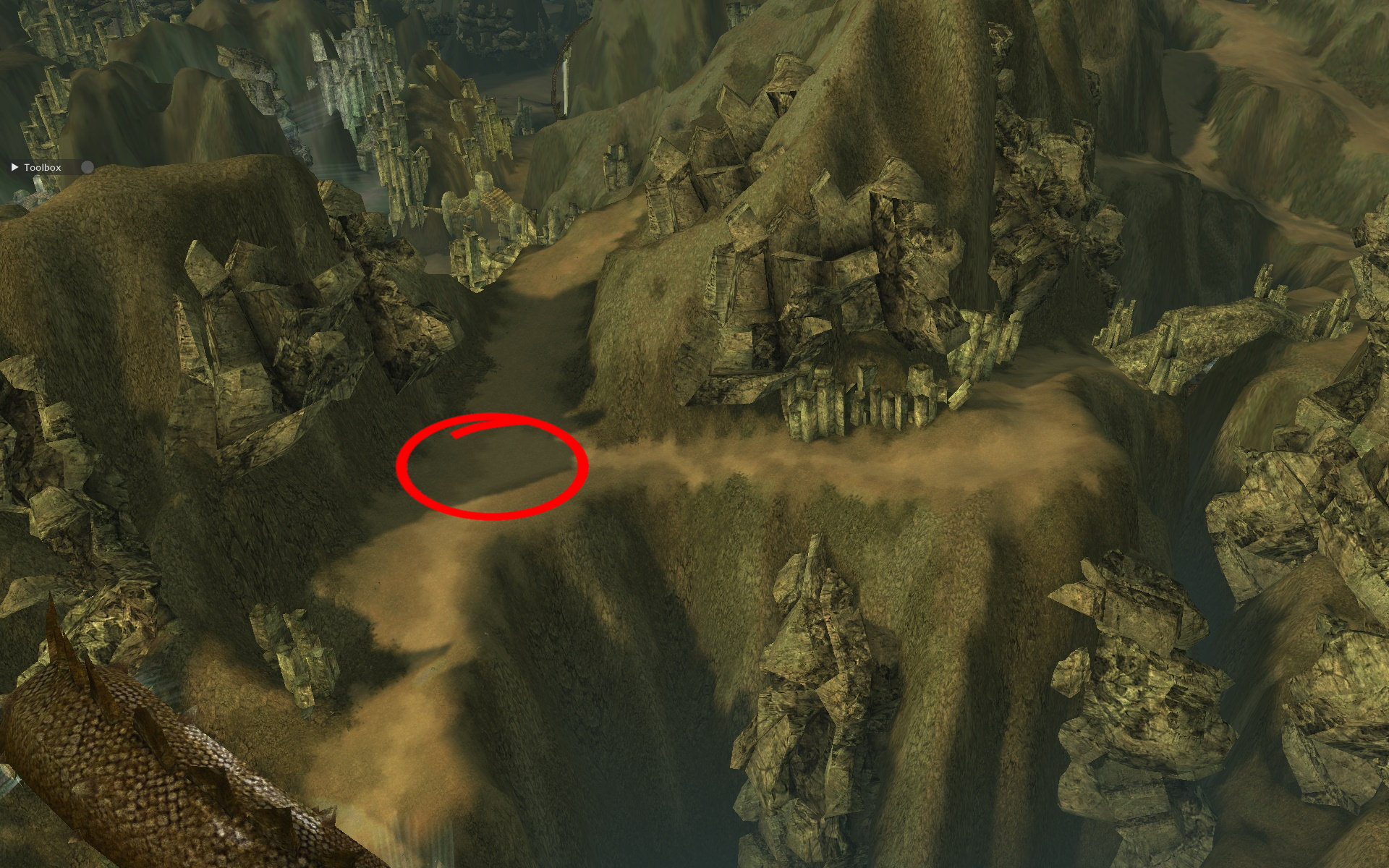 Aggroing him in this spot will allow you to pull him to the bridge without him breaking aggro at any point.

After successfully taking the quest, run towards the ledge and jump down to the Behemoth group. Next, Viper's or HoS over the wall using any of the targets behind you. 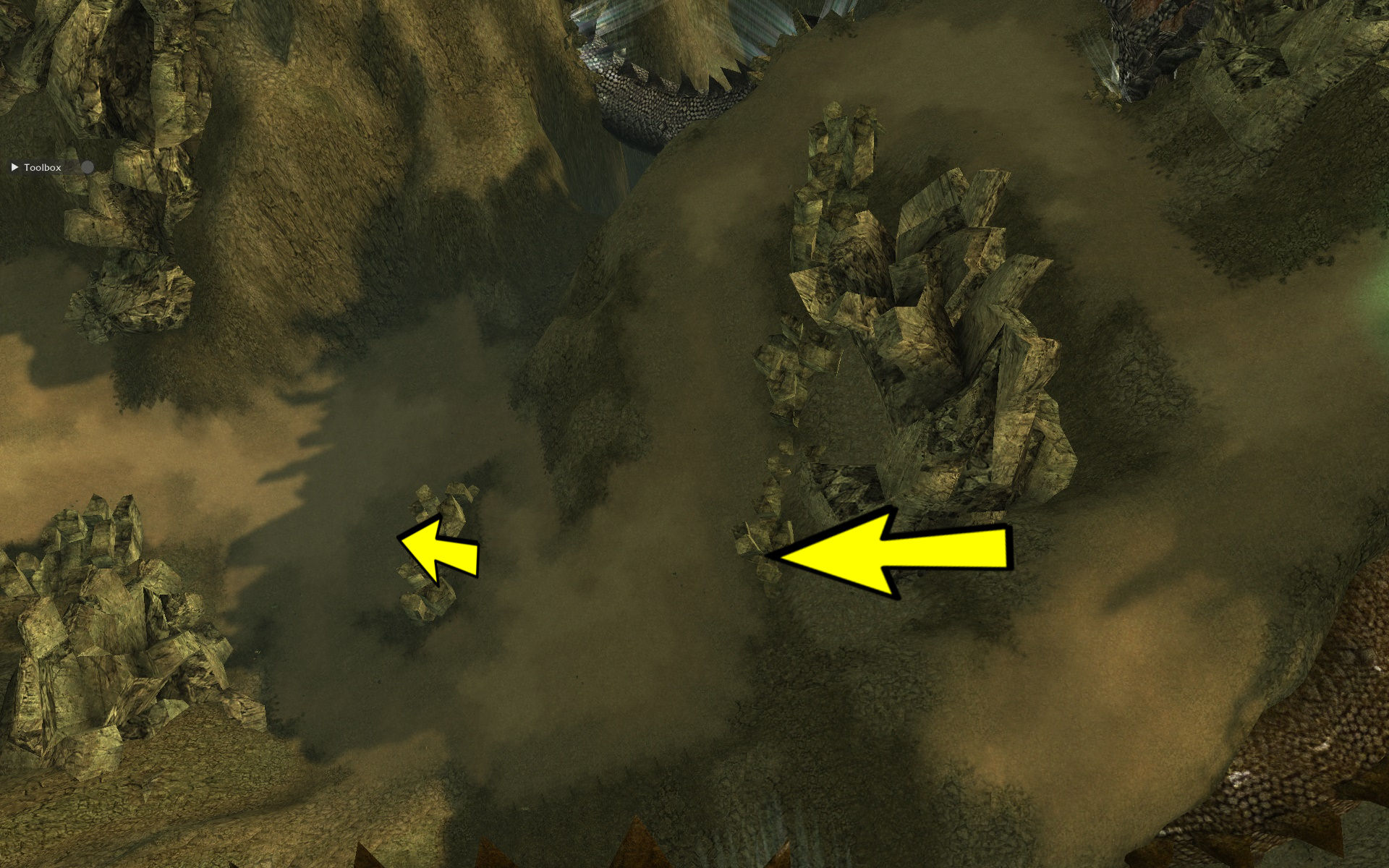 Check where the skele is, if you have done everything correctly and didnt get stuck, he should be approaching you from the way that you came from. If you did get stuck before at some point, he can be patroling next to the bridge which will make you inable to run there to kill the slayer. Depending on how close he is you might be able to run pass him and lose his aggro. If he's too close and you decide to run pass him you wont be able to lose his aggro which leads to quite a deadly situation. In that case you should wait for him to start patrolling back instead like shown in the video[1].

Use shroud and whirling defense when you meet the Slayer. If there are any charged incoming use Shadowform, otherwise use it only before you are about to aggro the terrorwebs. Deaths Charge to one of the white dryders on the bridge or Viper's/HoS over the behemoth group in front of it. 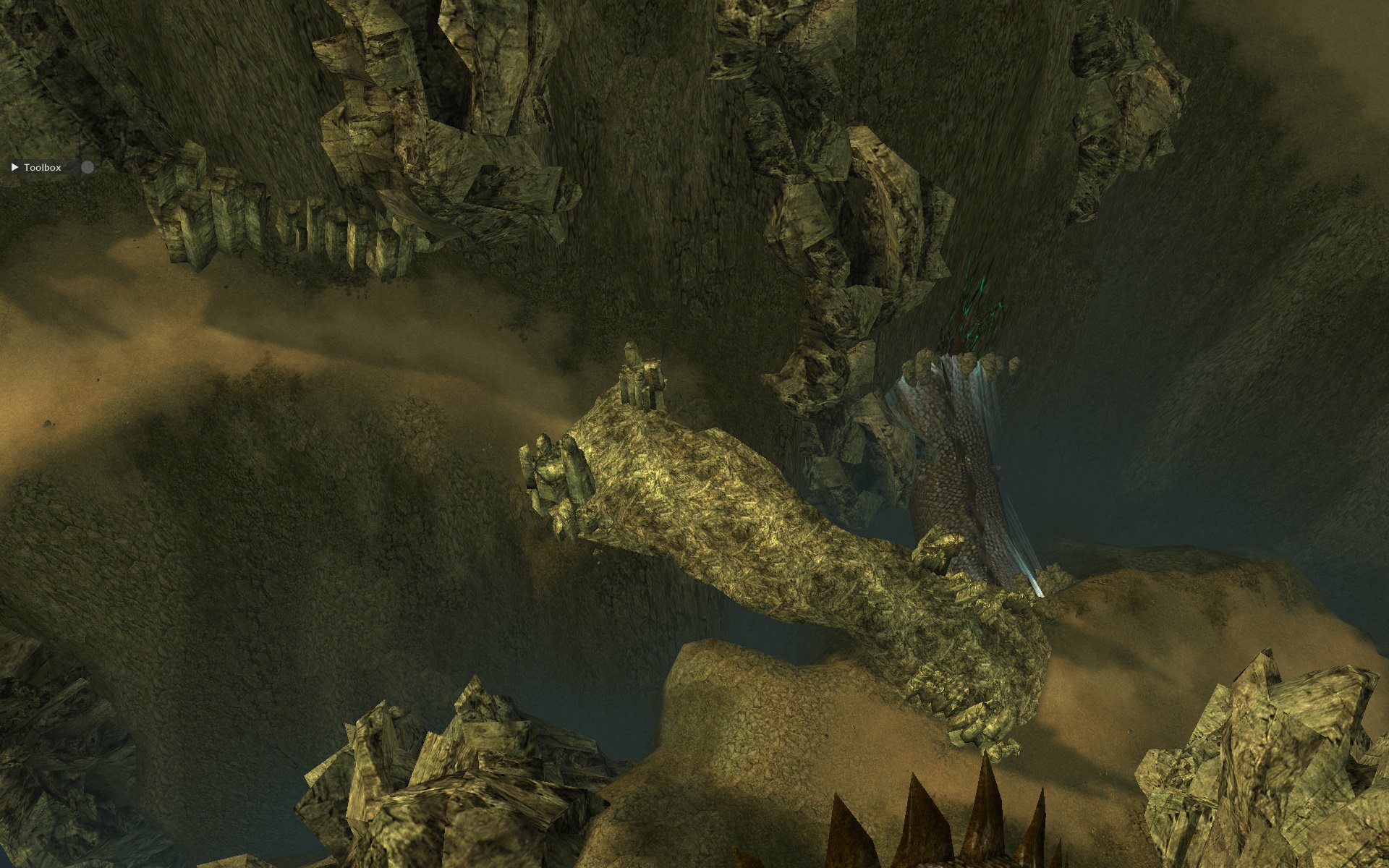 Position yourself somewhere around half of the bridge and wait for all the white dryders to come next to you and use lava font. Next, move towards the right side of the bridge, gain aggro of the behemoth group standing behind you and use winnowing. Dont move and auto-attack the slayer with a staff. Use shieldset only if you are stuck and taking too much lava font damage.

After the slayer is dead, once again use your anti knock-down skill and Death's Charge up the ledge to a behemoth group. 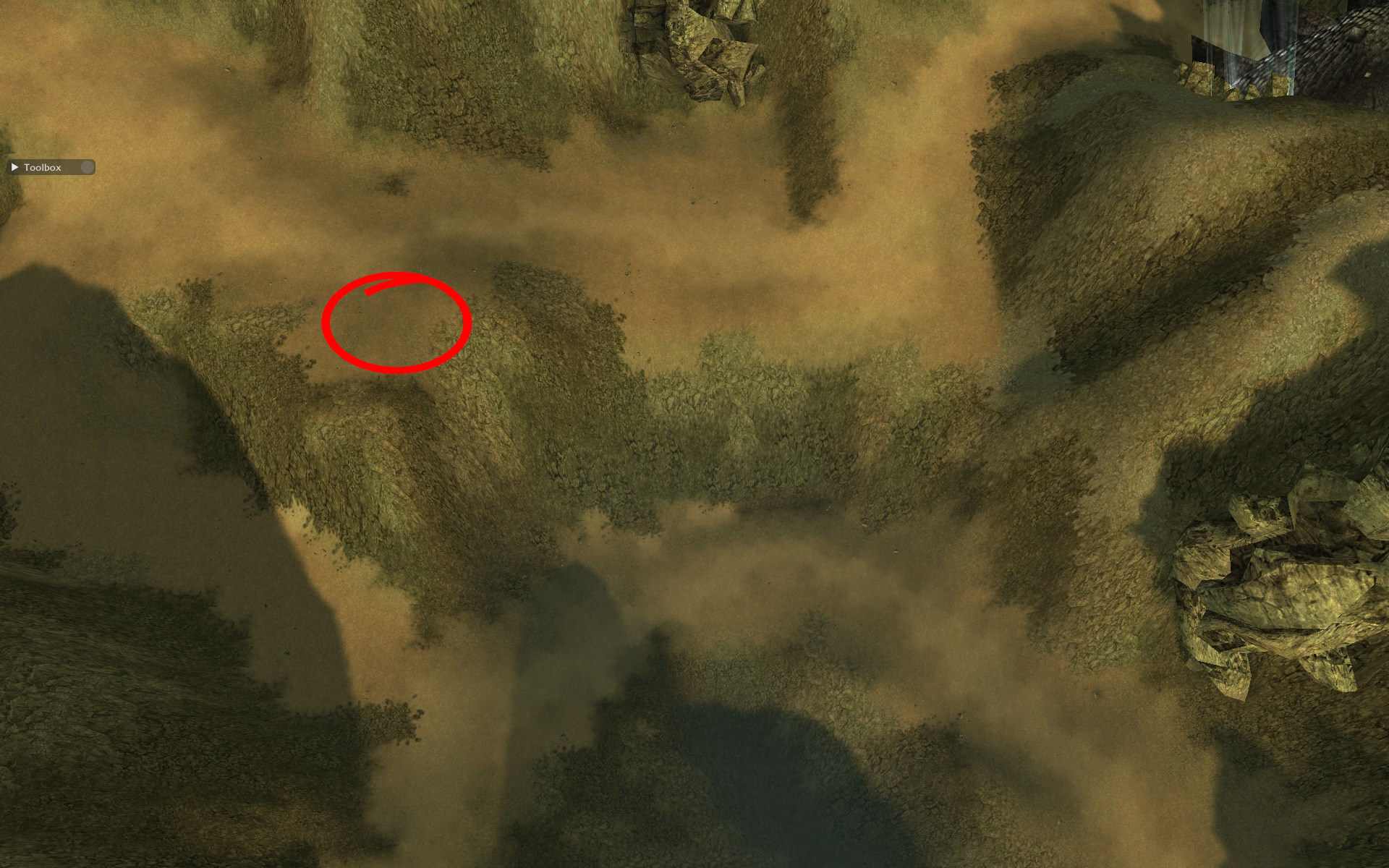 Run towards the exit gate and jump over obstacles with Viper's/HoS. Use shadowform before aggroing the dreamrider group in front of you and jump to them. 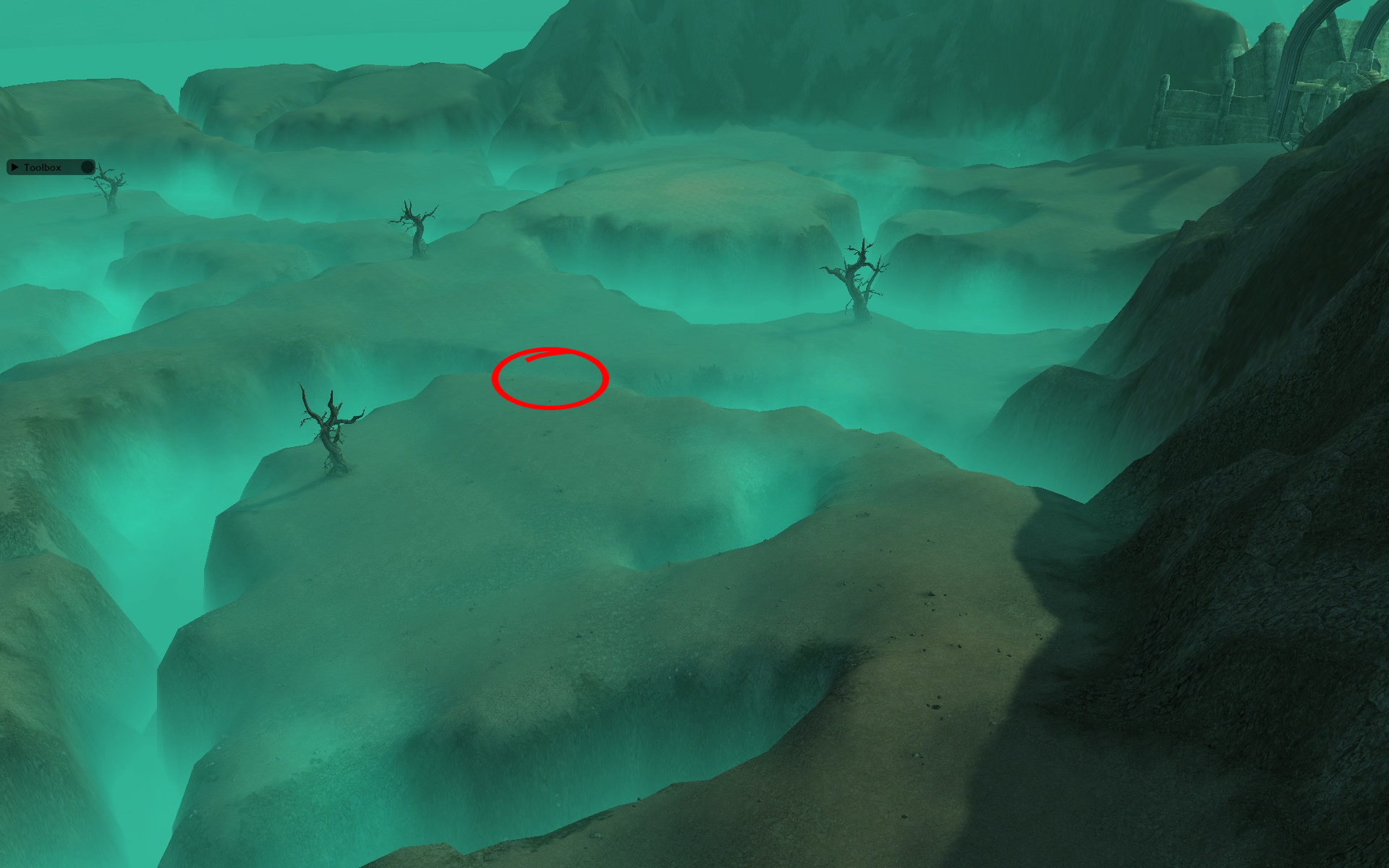 Without casting it again run towards pools. The pop-up Mindblades wont be able to cast on you because you will be too far away from them. Deaths Charge to one of the terrorwebs next to the gate to Pools and switch to your Fire shieldset. 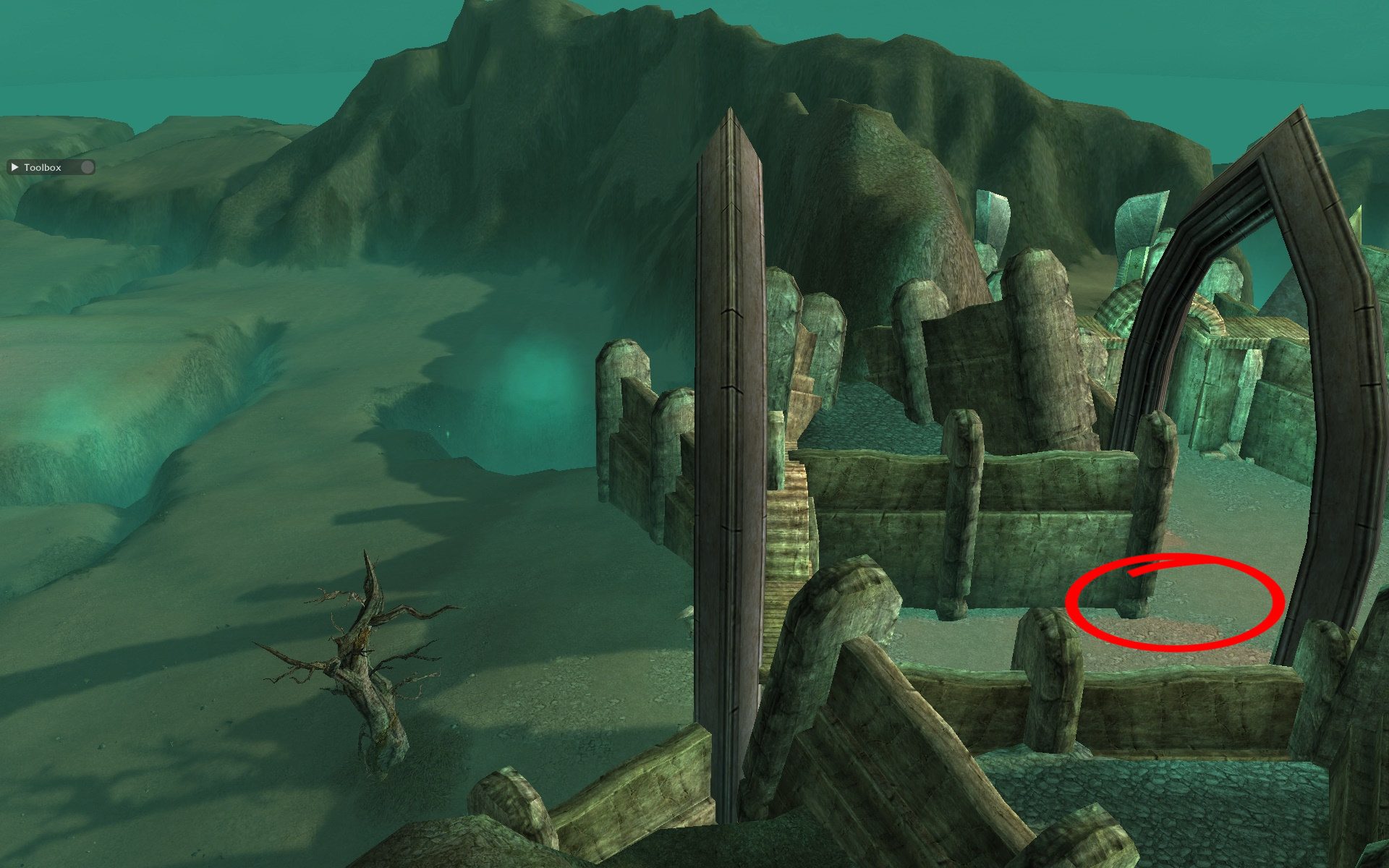 They wont be dealing much damage to you when you are moving, thats why you dont have to cast it yet. Use it before gaining aggro of the group of enemies patroling into you and Jump down. When you reach the monument area, use one of the targets behind you to jump up the wall and immidiatly break aggro of anything thats outside. 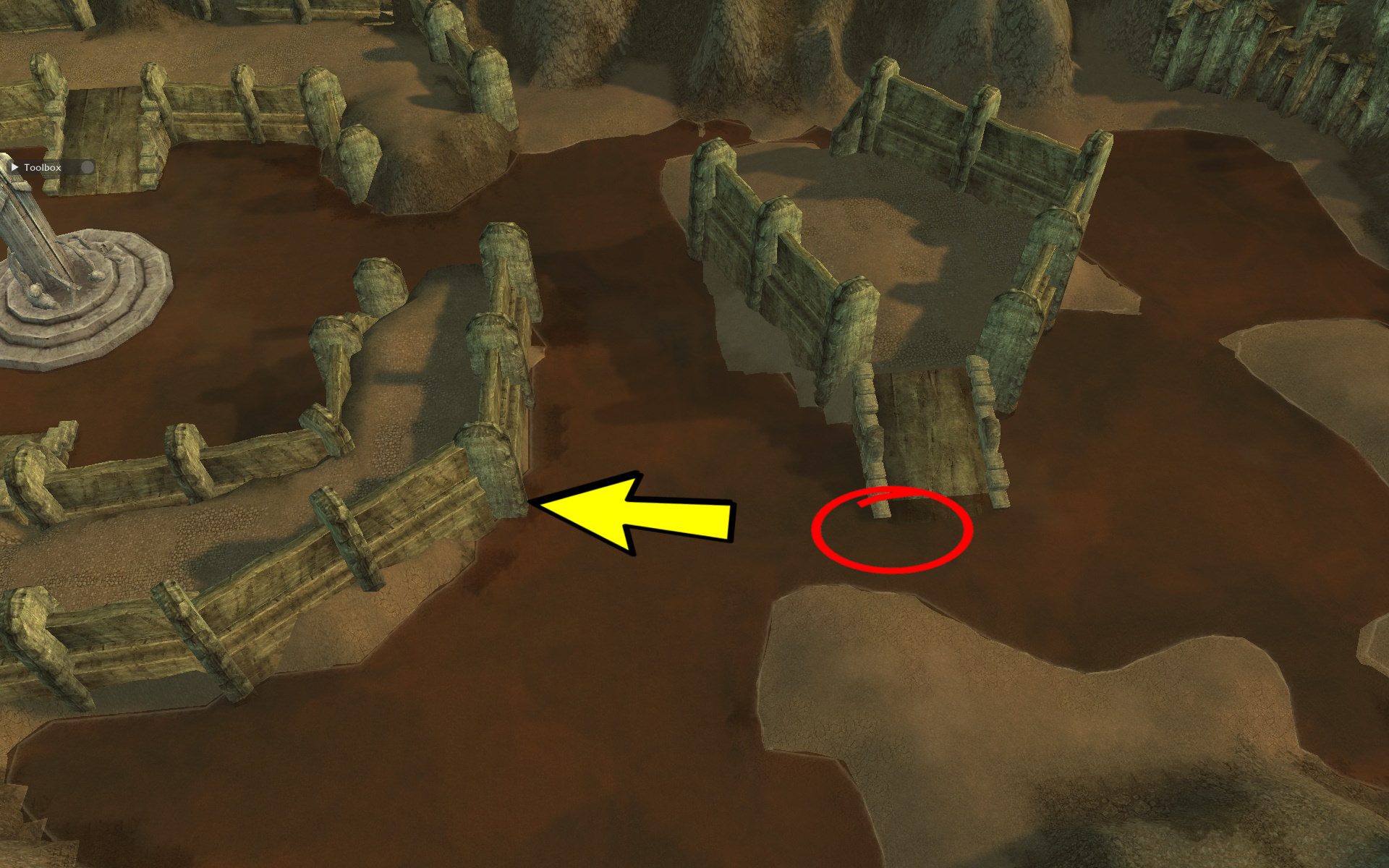 Aggro all terrorweb groups in the area and wait for them to settle down in your aggro range. In order to pop the monument efficiently you have to be patient. It might seem like a waste of time standing and doing nothing but you actually save more that way. After all the non-glitched ones start attacking you, gather them all together, and run towards them. That way you make all the glitches run away from the ball allowing you to poison them safely (viper's or Rad-field). After unglitching them ball everything together and kill them. Make sure that all terrorwebs are taking damage equally otherwise you might pop the reaper with terrorwebs alive and eventually fail the run.

Take the quest and vipers from the reaper to gain some distance. Deaths charge to a Terrorweb standing in front of the stairs on the right. Look for a skeleton patroling next to the entrance, if hes not anywhere close keep running forward. Doesnt matter if you are using rocks or not, run straight through the middle towards the queen and position yourself on the west side of it. Auto attack the white terrorwebs standing next to the skeleton, that makes them start attacking you faster. Maintain your enchantments and use Radiation Field. After you get below 50% you can switch to a shieldset to reduce incoming damage. Use Death's Charge if you are getting too low. After all the white terrorwebs and charged are dead you can use winnowing.

If any skele patrolls into you while you are killing queen, try running away and wait for the skele to walk away. You can also try to finish the quest. Use your heal only if you are below 150hp, that way you get the most advantage out of regeneration provided by shroud. You also might use Powerstone of Courage to recharge your heal if you really need to. A full HP armor is usefull in that situation.